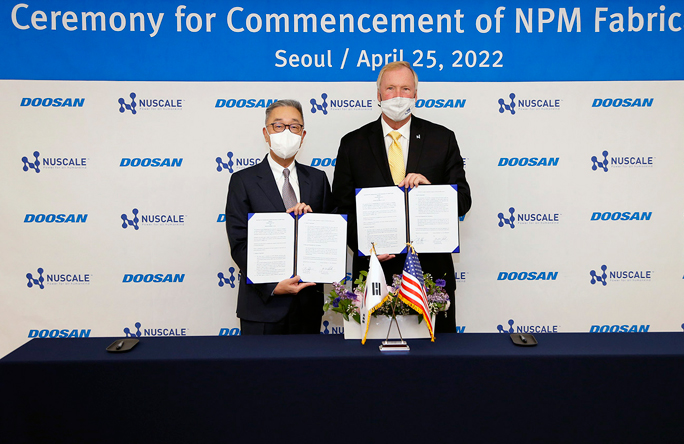 Doosan Enerbility announced on April 25th that it had signed an agreement with NuScale Power to commence full-scale manufacturing of NuScale small modular reactors (SMR), with the signing ceremony being held at the Doosan Tower in Dongdaemun, Seoul and attended by NuScale Power President and CEO John Hopkins and Doosan Enerbility Chairman and CEO Geewon Park. Prompted by the signing of this agreement, manufacturing will commence on the SMRs which are to be supplied to the Utah Associated Municipal Power Systems (UAMPS) power plant project, a project that is based in the state of Idaho and scheduled for completion by 2029.&nbsp; Doosan Enerbility will commence production of the large forged materials used in the SMR manufacturing in the latter part of this year and go into full-scale manufacturing of the SMR main equipment in the second half of 2023. Doosan Enerbility had secured the rights to supply equipment and materials, amounting to trillions of Korean won, through a US $103.8 million equity investment made together with a group of Korean financial investors. In 2019, Doosan Enerbility was commissioned by NuScale Power to perform a SMR manufacturability review, a task that was completed in January 2021. Doosan is now working on the development of the prototype. “Doosan Enerbility has continuously solidified its strategic cooperative relationship with NuScale Power and has made full preparations for SMR manufacturing,” said Geewon Park, Chairman and CEO of Doosan Enerbility.&nbsp; “The growing market demand for SMRs will also open the door for participation of our subcontractors,” he added. “NuScale welcomes Doosan Enerbility’s participation as a strategic partner in starting key equipment manufacturing for the first SMR nuclear power plant to be built in the United States,” remarked John Hopkins, President and CEO of NuScale Power.&nbsp; He added, “NuScale expects that Doosan will greatly contribute to the commercialization of the NuScale SMR with its world-class manufacturing capability.” In case of NuScale SMRs, a maximum of twelve 77MWe NuScale Power Modules (NPMs) can be installed per plant, giving the power plant the capacity to produce a total of 924MWe of electricity.&nbsp; The NuScale design received the NRC approval in 2020, making it the first and only SMR design to be approved by the NRC.&nbsp; UAMPS plans to submit the application for a combined operation license (COL) in the first half of 2024, and to receive approval and commence nuclear construction in the first half of 2026.&nbsp; Construction is slated to be completed by 2029. In addition to successfully carrying out the UAMPS Project, NuScale Power aims to target a wider global market, including North America, Europe and Asia. 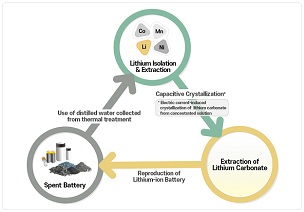 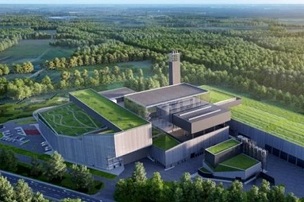 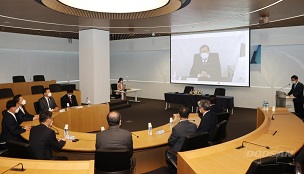 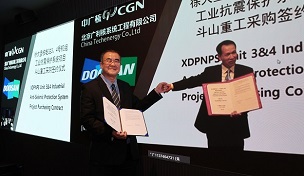 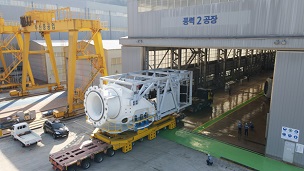