- Cooperation being pursued on green ammonia production and utilization to achieve carbon neutrality goal by 2050
- Dual-fuel green ammonia model to be developed and rolled out in succession to domestic 1,000MW power plants

Green ammonia is a leading environment-friendly fuel, one that is made by using carbon-free “green hydrogen” created from renewable energy. The hydrogen is combined with nitrogen to instigate a chemical reaction that leads to ammonia production. When used with other existing fuel, green ammonia has the effect of generating the same level of power output, while emitting less greenhouse gases.

KEPCO E&C will be handling the development of the overall plant engineering technology, such as plant optimization, while Doosan Enerbility will be in charge of developing the main equipment, such as green ammonia dual-fuel boiler and ammonia supply system. Samsung C&T’s Engineering & Construction Group will be pursuing the adoption of globally produced green ammonia in the domestic market and the delivery of related projects. The three companies will be strengthening cooperation in the areas of green ammonia production and utilization to achieve the goal of carbon neutrality by 2050, and plans are in place to have green ammonia applied at the domestic 1,000MW power plants successively.

“As green ammonia dual-fuel projects enable us to use existing power generation facilities, while generating considerably less greenhouse gas emissions, it is forecast to become a key technology that will facilitate our transition to carbon-free energy,” said Yeonin Jung, President and COO of Doosan Enerbility. He added, “We will actively execute this business cooperation agreement as part of our efforts to contribute to the global community’s goal of achieving carbon neutrality.”

Doosan Enerbility is using carbon-free fuels, such as hydrogen and ammonia, to expand its future energy business portfolio. In July of last year, the company joined the “Green Ammonia Association for Carbon Neutrality,” which is composed of local research institutes, thereby committing to the mutual cooperation framework for establishing a green ammonia value chain. To this end, a memorandum of understanding was signed with leading domestic companies, such as POSCO and KEPCO E&C, on pursuing the development of ammonia-fueled hydrogen gas turbine technology. 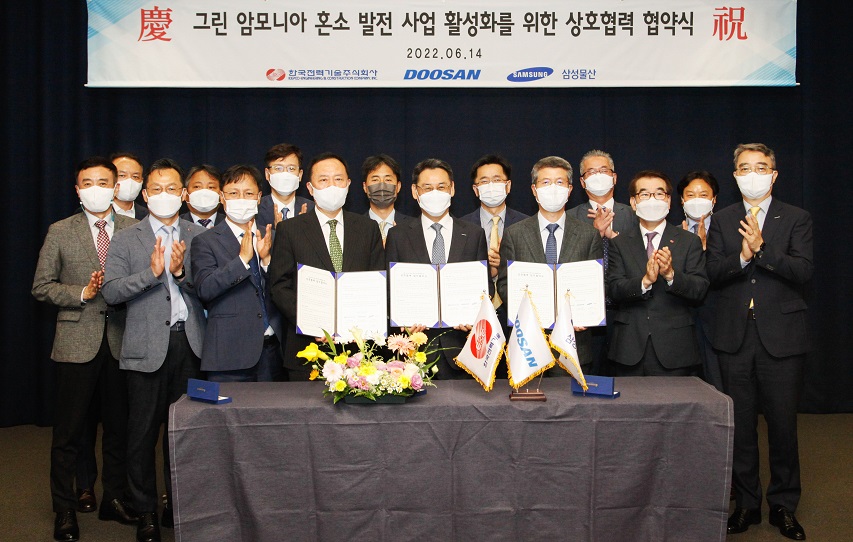