Doosan Enerbility is partnering up with local companies in a collective effort to strengthen competitiveness of the local manufacturing of nuclear fuel storage and transportation casks.

On August 30th, Doosan Enerbility announced that it had signed an “MoU on Cooperation for Domestic Technology-based Nuclear Cask Manufacturing Business” with eight partners from the nuclear power equipment field.  The MoU signing ceremony was held at the Gyeongju Hwabaek Convention Center(HICO), the venue for the “Global Nuclear Export & Safety Confex (NESCONFEX) 2022” which was jointly hosted by the North Gyeongsang Province and Gyeongju City. In attendance at the ceremony were Changyeol Cho, Vice President of Doosan Enerbility’s Nuclear Service Division and the heads of the eight local partners,* among others.
* Kyoung Sung Eisen, Gumkwang Tech, Moojin Keeyeon, Sam Hong Machinery, CERA Precision Industries, Super-TIG Welding, Pavetech, KHPT

With the signing of this MoU, Doosan Enerbility will be sharing its cask design and manufacturing expertise and know-how, which it steadily accumulated over the years, with these eight partner companies. This will help the partners build up their manufacturing competitiveness, thereby facilitating commercialization of the locally manufactured nuclear casks in both the domestic and global markets.

The spent fuel is initially stored in a wet storage tank for a minimum of five years to be sufficiently cooled, after which it is transported to an external container for dry storage. Dry casks are used for the transportation and storage of the spent fuel. As the casks need to specially manage the radiation and heat generated from the spent fuel, this requires the highest level of design and manufacturing expertise.

Doosan Enerbility is building a wide-ranging cask lineup suitable for meeting the nuclear market needs at both home and abroad. Doosan exported a nuclear cask to the US market last year, becoming the first Korean company to accomplish such a feat.  In 2017, the company completed development of the “Doosan-DSS21,” a Korean-type dry storage system that has the capacity to safely store and transport up to 21 spent fuel bundles. Since then, the DSS24 and DSS32 models, upgraded versions with larger storage capacity, were developed, along with the DPC-24, a cask that can be used for both storage and transporting of spent fuel.

Furthermore, Doosan also worked with the Nuclear Assurance Corporation (NAC) on jointly developing the MSO-37 model, a metal container which boasts of enhanced safety compared to the concrete storage containers generally used in the global market. The model has already passed the Nuclear Regulatory Commission (NRC)’s technical review stage of the design verification process and is scheduled to receive certification next month.

“With the need for nuclear energy being increasingly recognized worldwide these days, we expect to see the demand for spent fuel storage steadily grow,” said Kiyonga Na, CEO of Doosan Enerbility’s Nuclear Business Group. He added, “We plan to work together with the leading local manufacturers to actively target the global nuclear cask market and will do our utmost to promote growth of the nuclear energy ecosystem.”

In the meantime, in an effort to promote the company’s expertise in this area, Doosan Enerbility will be attending NESCONFEX together with its eight partners to present its extensive product line of spent fuel storage & transportation casks and solid track record as a supplier. 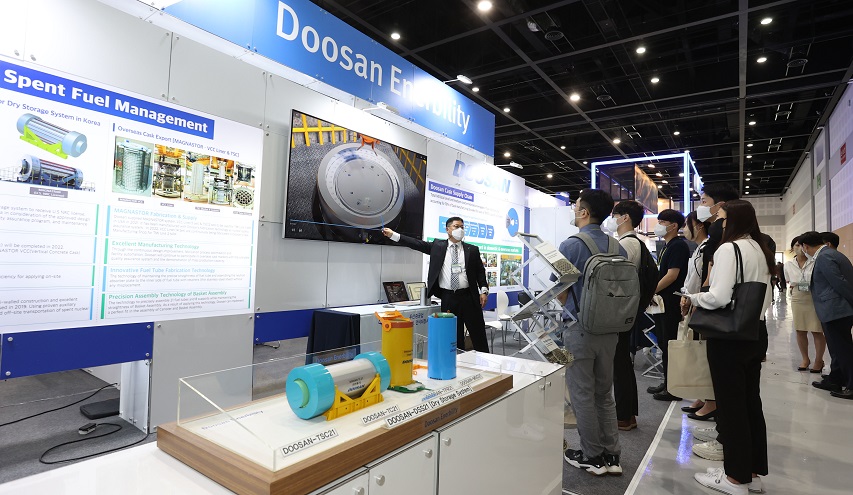