- EPC contract worth approx. KRW 540bn entered into with the project developer KEPCO
- Plant with a power generation capacity of 320MW and steam generation capacity of 314 tons/hr to be built to ensure supply for the Jafurah Gas Field
- Projects wins totaling over KRW 2.3tn recorded in Saudi Arabia this year, including the casting & forging facility and seawater desalination plant projects

Doosan Enerbility recently signed a contract valued to be approximately KRW 540 billion for the construction of a cogeneration plant in Saudi Arabia.

On September 23rd, Doosan Enerbility announced that it had signed a contract for the “Saudi Arabia Jafurah Cogeneration Plant” construction with Korea Electric Power Corporation (KEPCO). As the project developer, KEPCO will oversee the project development and operation, while Doosan in its role as EPC contractor will handle the overall process starting from design to the equipment supply, installation and plant commissioning.

The Jafurah Cogeneration Plant is to be constructed at a location that is approximately 400km east of Riyadh, the capital of Saudi Arabia. It is scheduled to be built by the second half of 2025, and once it is set up, it is expected to have an electric power generation capacity of 320MW and steam generation capacity of 314 tons per hour, to ensure the supply of electricity and heat to the Jafurah Gas Field.

“Following on the heels of the Ukudu Combined Cycle Power Plant project in Guam that we won in 2020, we find it truly meaningful to be able to participate in another global new build project like this as a Team Korea member,” said Inwon Park, CEO of Doosan Enerbility’s Plant EPC Business Group. “Over the next five years, as it is forecast there will be close to 30GW worth of new orders for combined cycle power plants in the Middle East region, particularly in Saudi Arabia, we plan to strengthen our market targeting efforts in this region.”

Doosan Enerbility is steadily solidifying its position in the Saudi Arabian market as made evident in how it has won over KRW 2.3 trillion worth of new build orders in the region this year alone. A contract for the construction of a casting & forging facility valued to be KRW 1 trillion was won this past February and another KRW 840 billion contract for a seawater desalination plant was won in August this year. 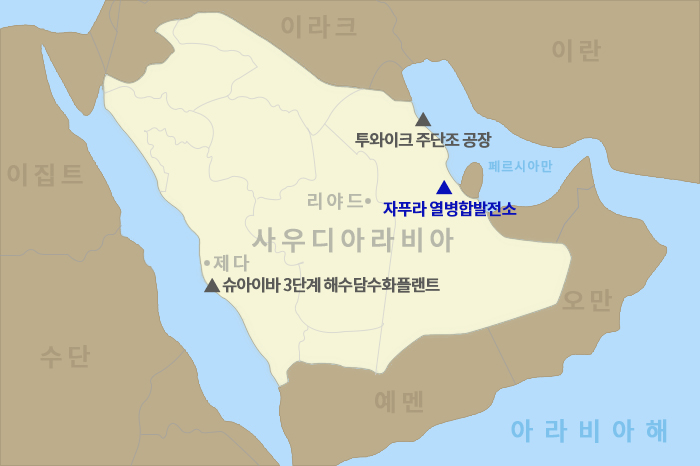