Doosan Enerbility is entering into a strong partnership with L&F to promote growth of its eco-friendly lithium production business. L&F, which is headquartered in Daegu city, is a leading manufacturer of cathode active materials for lithium-ion secondary batteries.

Doosan Enerbility announced on November 1st that it had signed a memorandum of understanding with L&F on “Cooperation for the Battery Materials Recycling Business.” The MoU signing ceremony that was held at the Bundang Doosan Tower in Seongnam, Gyeonggi Province was attended by Yongjin Song, CSO of Doosan Enerbility, and SuAn Choi, CEO of L&F, among others.

“With the battery market, along with the electric vehicle market, growing at a rapid pace these days, the demand for lithium is also steadily on the rise,” said Yongjin Song, CSO of Doosan Enerbility. He added, “We aim to create a virtuous cycle for the battery recycling business through cooperation with L&F, and will be using this as a basis to actively participate in the rapidly growing lithium market.”

Last year Doosan Enerbility developed the technology of extracting lithium by reusing the waste powder generated from the cathode material production process. This technology being Doosan’s very own patented technology involves heat treatment of the waste powder and the usage of distilled water to selectively separate lithium, after which lithium carbonate is extracted by applying the electro-adsorption crystallization technique. This method is more simple and economical compared to the conventional extraction methods, and also has the advantage of being eco-friendly as no chemicals are used. 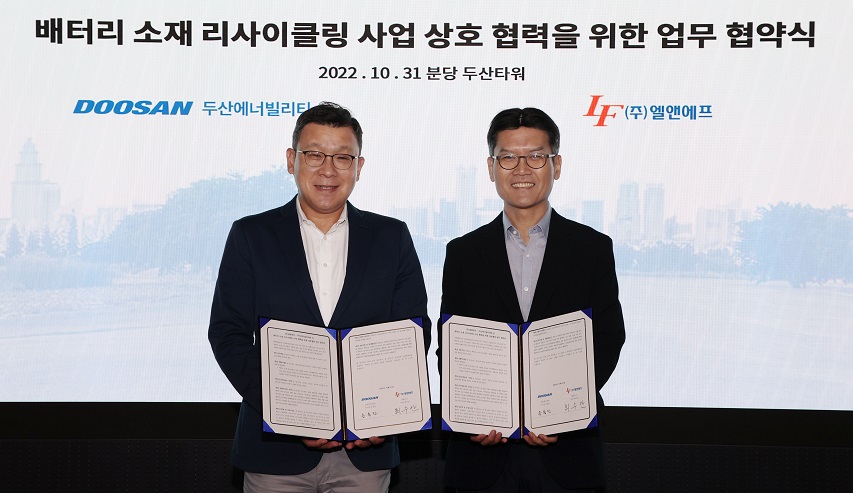