On December 1st, Doosan Enerbility announced that it had signed an “MoU on Cooperation for the Ammonia Cracking Business” with Johnson Matthey, a global leader in sustainable technologies. In attendance at the signing ceremony, which was held at Doosan Enerbility’s Changwon headquarters, were Kwangyol Lee, Doosan Enerbility’s Turbomachinery Business Unit Head, and Simon Stanbridge, Johnson Matthey’s Business Development Director, among others.
* Johnson Matthey, a UK-based company that was founded in 1817, specializes in the licensing of petrochemical process technologies and the production of catalysts. The company recorded a revenue equivalent to KRW 26 trillion last year.

With the signing of this MoU, Johnson Matthey will be providing the ammonia cracking process engineering technology and catalysts**, while Doosan will be providing the technologies required in the implementation of projects, such as for the detailed design of the ammonia cracker process, manufacturing of equipment, and the construction process. Furthermore, the two companies will be jointly developing the engineering technology for integration of the ammonia cracking process and hydrogen-fueled combined cycle power generation to be applicable to combined cycle hydrogen power plants in the future.
** A substance that increases the rate of a chemical reaction, without itself undergoing any chemical changes. In order to be able to convert ammonia into hydrogen, a catalyst is needed to trigger the chemical reaction of ammonia decomposition.

“Ammonia cracking, which is helping to lower the entry barrier to combined cycle hydrogen power generation, is a key technology that will contribute to carbon neutrality.” said Hongook Park, CEO of Doosan Enerbility’s Power Services Business Group. He added, “This partnership signifies that the entire value chain for combined cycle hydrogen power generation will be built, resulting in hydrogen production through to hydrogen end-users.”

Ammonia (NH3), a chemical compound composed of hydrogen and nitrogen, is regarded as being an economical “hydrogen carrier,” as it has the capacity to store 1.7 times more hydrogen per unit volume compared to liquid hydrogen (LH2). Moreover, if the ammonia cracking technology is applied to combined cycle hydrogen power plants, the nitrogen that is generated from the ammonia cracking process has the advantage of providing improved hydrogen gas turbine performance, ultimately leading to enhanced energy efficiency.

Doosan Enerbility is currently participating in a state-led project with the Korea Institute of Machinery & Materials (KIMM), one that is titled “Development of Eco-Friendly 50% Hydrogen-Fueled Combustor for 300MW Hydrogen Gas Turbine.” Even after completion of this project, Doosan plans to continuously engage in domestic industry-academia-research sector partnerships to complete the development of a 380MW 100% hydrogen-fueled gas turbine by 2027. 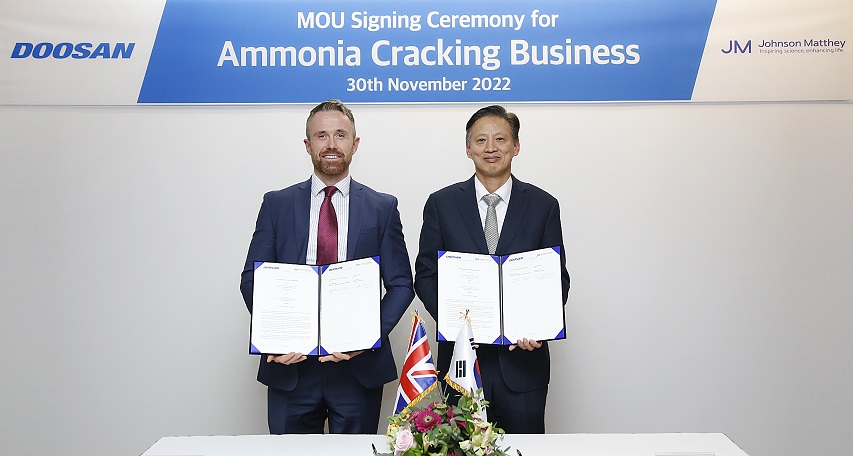