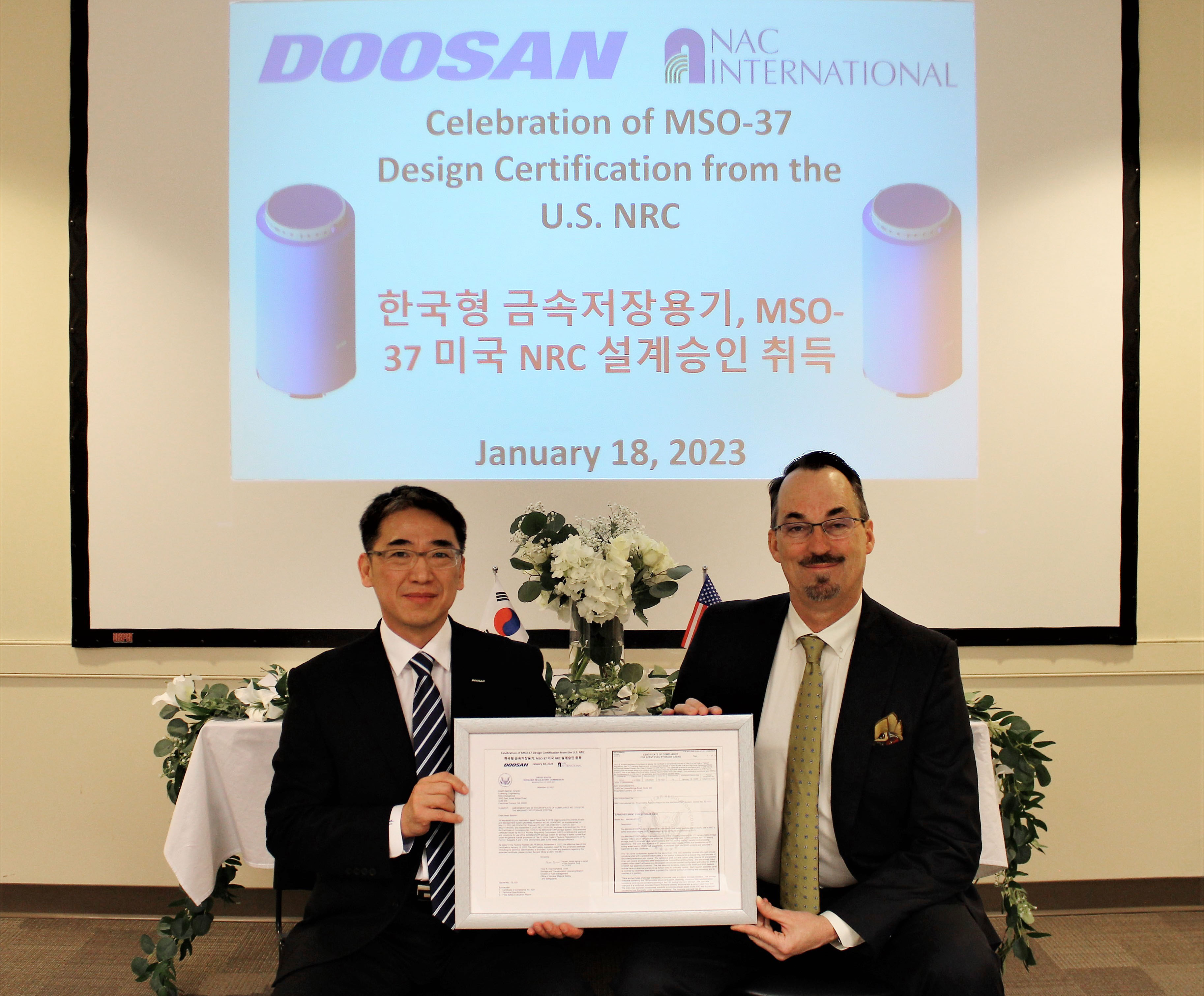 Doosan Enerbility has received the green light in the participation of dry storage business of domestic spent nuclear fuel in Korea.

Doosan Enerbility announced on January 19th that it has received the U.S. Nuclear Regulatory Commission(NRC)’s design certification for the metal storage overpack of spent nuclear fuel, that was jointly developed with NAC(Nuclear Assurance Corporation). The ceremony held to celebrate the design certification was held at the NAC corporate headquarters located in Atlanta and was attended by the key related parties, including Changyeol Cho, Vice President of Doosan Enerbility’s Nuclear Business Group, Kent Cole, President and CEO of NAC International.

The “MSO (Metal Storage Overpack)” may store up to 37 pressurized water reactor (PWR) fuel assemblies and is the world’s first metal storage overpack to have obtained design certification from the U.S. NRC. Compared to the conventional concrete storage casks, this newly developed metal storage overpack provides robust radiation shielding and structural integrity, significantly reduces the diameter of the cask, thereby optimizing the storage cask’s footprint in dry storage facilities, which in turn allows storage of more casks in the same locality.

The spent nuclear fuel is stored in the water-filled pool of a spent fuel building for the first five years and is then moved to a cask or dry storage facility to be cooled down by air for dry storage periods. Given the characteristics of spent nuclear fuel, facility operation environments, and public demand for rigorous safety and radiation protection standards in Korea, the MSO was specifically developed.  As the safety  management of the spent nuclear fuels is very important during the dry storage, the casks require the highest level of special technology and experience in design and fabrication.

“With the technical capabilities recently acquired from the development and licensing experience of the metal storage overpack, we plan to actively participate in spent nuclear fuel dry storage projects in the domestic market and to also contribute to the future development of casks designed for permanent disposal of spent nuclear fuel,” said Jongdoo Kim, Head of Doosan Enerbility’s Nuclear Business Group.  He added, “Based on our supply chain built with the leading local manufacturers, we are set to actively target the global nuclear cask market and will do our utmost to promote growth of the nuclear energy ecosystem and overseas exports.”